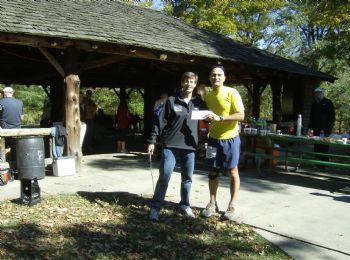 Wow! This was one tough trail race. It was 5+ miles on the first loop done four times and 3 + miles on the second loop repeated 3 times.

The trails were rocks and roots and very little flat or smooth areas. So at 8AM we start. Maybe 75 are running this race and the course record is 4:31 and 100 dollars was being offered for breaking that record. I wasn't worried about that. After winding in and out of the trees for 2.5 miles you came to why this trail got its name. The stone steps. You looked up and they went on forever and then you rounded a bend in the trial and they just kept on going. It was so tough as they were straight up it seemed. At the top continued to run and recover from that climb. The last big hill was toward the end of the 5+ mile loop and it was a dozy also, but with no steps.

The 3+ mile loop was not as bad, but still hard. It was a very pretty trail race and I did stop/slow down so that I could see the sights. I had to do it that way because if I lost focus on the trail I'd trip and fall.

On the last loop I tripped and landed on my hands cutting my right hand a bruising my left on rocks. Ouch! Also on the first loop I twisted my right ankle, quickly followed by my left. Hurt, but wasn't bad. On the last 3+ mile loop I again twisted my left ankle and that hurt and it was swollen just a little after the race. Tis okay now.

At the end I was presented with 150 dollars for winning the SouthWest Ohio 50K trail race series (four 50Ks) . Hurray! Now, I am done for the year. Time to rest and let the body heal. It has been a tough, good running year for me, but if I don't stop for awhile my knees are going to get very angry. :)