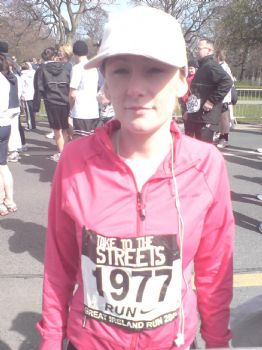 I ran in my first race EVER today and it was amazing! It was bitter cold waiting for it to start but once it did I felt great. Even when it started to hail the size of marbles I didn't mind (mostly because I had a baseball cap on and they weren't hitting me in the face!). Up until 8k it was easy, then it started getting hard but I kept on going. Although I did it on my own per se, as in not with any friends, I felt part of something so much bigger. I'm not sure how many were there but it was thousands. i ran the race for charity, the Marie Keating Foundation to be exact. Its a cancer research charity that Ronan Keating, of Boyzone fame, and his family set up after the death of their mother. I decided way back at the end of last year to do the run for this charity because of the history of cancer in my family of which I will tell you in a moment, but it was made all the more poigant when another relative, my uncle passed away on Friday from this terrible disease. It all started with my mothers mother who died of cancer when my mother was a teenager, then her father went in her early twenties. Two years ago her eldest sister died of cancer and now her eldest brother. Her next older sister is also battling the disease. As you can see cancer seems to be rife in our family so you can see why this race was even more important for me.
But as I said, it was AMAZING, and I reckon I'm now totally addicted! I can't wait to sign up for another one!
Share This Post With Others
Report Inappropriate Blog
Member Comments About This Blog Post