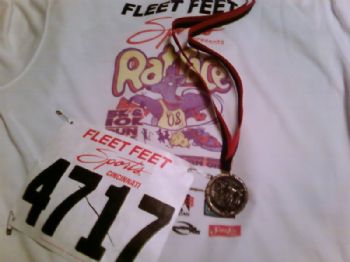 I've come to the conclusion that, for me, the 5K is one of the toughest mental races to PR in. There is very little room for error and very little room for doubts. You have 3.1 miles to run your fastest. I've been slowly eating away at my 5K times over the years. I started out at about 25 minutes a few years ago and have been knocking off minutes ever since then. I reached a point last year where I wanted to make a run at a sub 20 minute 5K. It became more than a goal. It became my Mount Everest. It seemed insurmountable. It would mean running 3 miles at under 6:30 per mile with enough left for a kick at the end.

The Closest I've come to reaching this goal was last summer when I ran the Big K 5K. I came so close but fell short by 8 seconds. It was a tough defeat made a little easier to swallow with the delicious award I got for finishing 3rd in my division. So, here I was a little less than a year later on a late April afternoon in perfect weather conditions with it cool and overcast, the perfect flat fast course with no bridges to slow me down. I had been feeling good about my speed work. There was only one minor thing that could go wrong: my legs. With 9 months of marathon training under my belt the wear and tear was in full effect on my shins and feet. I stretched and warmed up thoroughly taking a run through the course to get a feel for it and made a deal with myself. If nothing else I would run as fast as I could. I would leave nothing. I would do my best and let everything else take care of itself.

Before the race I had a couple of nice encounters that kept my spirits up and my mind off the pain that was sure to come. This was a Leukemia and Lymphoma Society event so Team in Training was out in full force as many of the Flying Pig runners were there to run the 5K or 10K. One the members from my Striders Running Group was lining up, and my biggest surprise was meeting one the Sparkpeople Running Team members at the starting line. I saw that she was going to be there but had no idea if I would be able to pick her out just based on the photos from the website. I recognized her right away and we met for the first time and had a nice little pre-race chat. Even if everything fell apart on the course it was shaping up to be a fun evening.

600 or so runners and walkers stood around the starting line in a sort of purgatory as there was a delay for the runners who were waiting in line for the bathroom. I just listened in on idle chatter around me as I tried to keep from psyching myself out. I didn't want to think about the race anymore I just wanted to go. Finally the national anthem was completed and we were ready. Set. The gun went off and we were away.

I positioned myself near the front of the pack and near the outside. I looked at the results from last year and felt comfortable being near the front. In a race this short there is not time to wait for the crowd to thin out. I needed to be on pace immediately. There was no pacing myself. I just bolted and set a pace what felt like just below an all out sprint. I was shooting for a pace that I hadn't been really training for during marathon training. I needed to push it way past comfortable the whole time. We headed out for a loop through a neighborhood that would come back near the starting line to turn on to the bike path. That first mile was a blur. I had a nice long 4 mile warm up so I didn't feel stiff. I didn't feel great though either. I wasn't breathing very smoothly and my stride felt off, but I kept pushing it. Mile 1: 6:00 flat.

I was heading into mile 2 feeling pretty good. The super fast runners were steadily pulling away, but I wasn't being passed either so I wasn't panicked. We were turning on to the trail and my stride was feeling a little more in sync, but my breathing sucked. I was getting a solid case of cotton mouth building up and it wasn't helping matters. At some point around 1.5 miles I nearly choked on my own spit as I inhaled it. That didn't help. It also didn't help that I was already feeling fatigued and like I was all alone as I was in the no man's land between the super fast runners and the pack behind me. The long flat trail seemed to stretch out forever and time seemed to slow to a crawl. The turn around was a little past the two mile marker. Where was it? Time seemed to be creeping away. I grabbed some water from the water stop to try and clear out the cotton mouth and passed the mile 2 marker. mile 2: 12:46.

I was starting to have my doubts. My pace had dropped off sharply. Where was the turn around? Time seemed to be slipping by at a snail's pace, but not as slowly as I felt I was running. My hamstrings were quivering and felt on the verge of cramping. "At least if I got cramps I would have reason for my failure". Oh no. The voice of doubt had been awoken. I hit the turn around and headed back. I could see the pack coming the toward me now and saw that I had a guy coming up behind me very quickly. I didn't speed up. I figured he would just buzz by me furthering fueling the voice of doubt. He didn't. He fell into pace behind me. I moved closer to the edge of the path to be sure he would he have room to pass if he wanted but he didn't. His breathing was as labored as mine and it sounded like he was sitting right on my shoulder. This actually made me feel a bit better knowing I wasn't the only one suffering. "Just slow down a bit and let him pass. You're 20 minute goal is out of reach anyway". No, I wasn't going to slow down. No, I wasn't going to just let him pass. How could I make the voice shut up? Count. Count! I began to count my breaths as time continued to stretch out. 1, 2, 3, 4, "Seriously just slow..."5, 6, "are you listening...."7, 8, "fine, whatever...".

Another thought occurred to me as I was struggling. What would Dave think if I just quit? Really? How much grief would I have to take if I just decided to give up? Maybe none. Maybe a lot. I didn't want to find out. I was going to see this out even if it meant puking on the finish line and collapsing which both seemed very good possibilities. Finally, the mile 3 marker came and went. mile 3: 19:11.

This was it. I found that I had a little gas left in the tank, so I punched it. I picked up my pace for the last tenth of a mile. Time didn't matter anymore. It was now a race between me and the heavy breather that had been on my shoulder for the last mile. He began his own sprint to the finish and creeped up next to me. We could both see the finish line and were totally zoned in on it. My head was pounding my breathing was ragged, but amazingly I had one more gear left and kicked it up again. All I had to do was make it into the finishing chute ahead of heavy breather. Nothing else mattered, and it was over. I walked to the other side of the finishing chute to get my tagged ripped. I hadn't even looked at my watch and just barely caught a glance of the finish line timer. I knew I was close. mile 3.1: 19:56.

My official time was 19:58 as I finished 2nd in my division and 11th overall. I was all smiles and happiness after I stopped aspirating my own spit and was able to breathe again. The rest of the evening was spent enjoying food, drinks, and the good company of the Team In Training group. I caught up with my Spark friend again after the race for a moment and she was happy with her race as well. After years of chasing the goal it was done. I was satisfied and buoyed by the knowledge that through the groups that I have been training with and the people that I've gotten to know I had a wonderful group of friends to share these races and experiences. No matter whether I met any of my goals the rest of my running life I was no longer running alone.

But speaking of goals how awesome would it be to qualify for Boston?

For a few more photos and my other stuff go here:
abiker.blogspot.com/2008
/04/rat-race-5k-race-repor
t.html
Share This Post With Others
Report Inappropriate Blog
Member Comments About This Blog Post