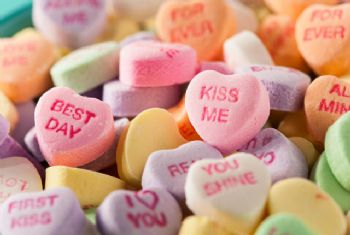 Valentine's Day means chalky candy hearts with a lot to say. But what's behind these very loud little candies?

The story of conversation hearts began in 1847, when a Boston pharmacist named Oliver Chase longed for a way to get in on the apothecary lozenge craze. Lozenges were quickly gaining steam as the medicine conveyance of choice, and were also popular remedies for sore throats and bad breath. But making lozenges was complicated and time-consuming—the process involved a mortar and pestle, kneading dough, rolling it out, and cutting it into discs that would eventually become lozenges.

There had to be a better way, and Oliver came up with it. Inspired by the new wave of gadgets and tools that hit America as it industrialized, he invented a machine that rolled lozenge dough and pressed wafers into perfect discs. Oliver had inadvertently created America’s first candy-making machine, and before long, he had abandoned his pharmacy business to crank out miles of what would become New England Confectionery Company (NECCO) wafers.

Legend has it that Oliver’s NECCO wafers were carried by Civil War soldiers, and some speculate that the tradition of sending loving greetings to the troops morphed into the conversation heart, but those claims are hard to verify. What is clear is that as Oliver built his candy empire, his brother Daniel decided he wanted a piece of the action.

Inspired by the growing market for Valentine’s cards (which were popularized in the United States by Esther Howland, also a resident of Boston at the time), Daniel wondered if it would be possible to print sentimental messages on candy. In 1866, he figured out a way to print words on candy with vegetable dye during the cutting process.

People loved conversation candies (they weren’t available in heart shapes until 1902) and their witty messages, which could stoke the flames of love or warn off flaky suitors. Daniel’s candies were bigger than today’s version and had phrases like “MARRIED IN WHITE YOU HAVE CHOSEN RIGHT” and “HOW LONG SHALL I HAVE TO WAIT? PLEASE BE CONSIDERATE” emblazoned on a pastel, scalloped wafer.

By the turn of the century, the conversation heart was a Valentine’s cliché. Here’s how they were used at a Boston party in 1911. Partners for the evening were found by means of candy “motto” hearts. These were broken in two, and each young lady was given a piece, but the men were obliged to hunt for theirs. As they were carefully hidden, this took some length of time and proved an excellent ‘ice breaker.’ The silly mottoes were read with laughter as the couples chose their tables.

Over the years, conversation hearts lost size, but gained many more phrases. NECCO estimates that it makes nearly 100,000 pounds of the hearts each day throughout the year in preparation for Valentine’s Day.