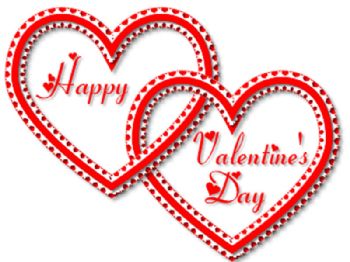 The day is celebrated as the commemorative day of Saint Valentine. The interesting fact is it is not certain whether this is one specific person, or the group of 14 martyred saints of ancient Rome, all of the same name.

The Valentine's Day chocolate boxes were introduced in 1868 by Richard Cadbury.

Some popular symbols of love used to express the feelings are cupid, arrows, doves, love birds, roses, and hearts.

During 19th century, physicians would prescribe chocolates to their patients, who would pine for a lost love.

The cops of Saudi Arabia banned the sale of anything red or symbolizing love in 2002 and 2008, believing that this is a Christian festival, resulting in a black market of Valentine's Day gifts in 2008, which witnessed an even bigger number of customers.

We all have heard the phrase "wearing your heart on your sleeve", but the phrase has actually come from Middle Ages, when according to a popular tradition, young men and women would draw chits from a bowl, to know the names of their valentines and then, would wear that name on their sleeve for the entire week.

The famous gifts and cards company Hallmark, launched its first valentine product in 1913

Reports indicate that more than 36 million chocolates boxes which are heart shaped gets sold on the eve of Valentine’s Day.

Studies depicts that this Valentine’s Day shall witness a total of over 8 billion candies shaped in the form of hearts.

A total of 50 billion roses are brought to exchange them between the lovers.

In Finland Valentine's Day is called Ystävänpäivä which translates into "Friend's day".

In Slovenia, a proverb says that "St Valentine brings the keys of roots", so on February 14, plants and flowers start to grow.

In Korea, the custom is if you do not receive any gift on Valentine's Day, then you, along with all the singles, go to Korean restaurants and eat black noodles to mourn their single status.

The Italian city of Verona, where Shakespeare's lovers Romeo and Juliet lived, receives about 1,000 letters addressed to Juliet every Valentine's Day.

Alexander Graham Bell applied for his patent on the telephone, an "Improvement in Telegraphy", on Valentine's Day, 1876.


The oldest surviving love poem till date is written in a clay tablet from the times of the Sumerians around 3500 BC.

In Medieval times, girls ate unusual foods on St Valentine's Day to make them dream of their future husband.