A Little Child Shall Lead Them...

Okay, so my daughter is 18 now and is not a "little child," but I have to say that HER weight loss journey has been a major crux in the success of mine.

I began my diet journey in January of 2014, as I've mentioned. It really started as a "new thing" I wanted to do, maybe a long-overdue midlife crisis or something. My husband of almost eight years and I had decided to part ways the previous fall (he left in October of 2013 - a good thing for all involved), and I was on the threshold of one of those self-reinventions so many people talk about. In that January, I decided to start a new trend for myself: an annual "Project Me" upgrade. Since then, every New Year's Day, I set 100 goals (not merely one resolution) to strive toward that year. Some are lofty (like "buy a new car" or "finalize my divorce"), while others are fun (like "fly a kite" or "go roller skating" or "finish five craft projects"), while others are spiritual (like "read the Bible through in a year" or "donate $50 to charity" or "volunteer five hours of my time"), while others have other intentions, like rediscovering pieces of myself that I have lost and miss or bringing more fun into my life or helping others or improving my finances or health. It is fun to set them and even more fun to try to achieve them every year, and I use a scrapbook and take pictures to keep track, which makes it all the more fun and gives me a sense of accomplishment (not to mention a fun memento of the positive things we do during the year). In 2014, though, one of the most lofty of my 100 goals was this one: "Lose 100 pounds."

I had used Spark before, a couple years prior to that, and I'd originally happened upon it because I was basically looking for a FREE way to count my calories (I say again that NO ONE NEEDS TO PAY a program for that). I knew from prior experience that calorie-counting, reporting, and accurate accountability is the key to me losing weight. So, in 2014, to lose that 100 pounds, I revisited Spark. I recalculated my nutrition tracker stuff and started over. I recorded EVERY calorie (even for things like condiments, medicine, and chewing gum), and I began to make some changes in what I ate, removing certain things (like fast food, table sugar, margarine/oil, etc.). I started drinking more water and taking the supplements and herbs that I know help (like cinnamon and garcinia and others, as my family has been in the herbs and supplement business for over four decades). I didn't join a gym or start exercising; in fact, my job literally keeps me on my rear for about ten hours a day, and I am admittedly a lazy person who doesn't really like to play sports or break too much of a sweat. I do occasionally go geocaching (look it up - it's fun!) or take a short walk on the bike trail, but that's it. I was confident that doing what I'd successfully done back in 2003 would work, and it did.

A few months into my diet, my teenage daughter announced to me that she was going on a diet too. As the mother of a very self-conscious teenager who had always struggled with her weight, I knew better than to say much to her about her weight. The kids at school were mean enough before she started online schooling, and she had a very poor self-image as it was. Of course, she could have been on My 600-lb. Life and would have still been beautiful to me, but as her mama, I was also worried about her health, both physical and emotional. Cissy had a weight problem for much of her childhood and most of her teen years, and that made life harder for her. The kids mocked, she couldn't play sports, and she lacked confidence. That was all a shame, because she is really a GREAT kid, a very smart one, with much potential, and it broke my heart that my poor example of being overweight and overeating and eating poorly for so long, probably also coupled with some unfortunate DNA, had led her down a road of dismal health and body image. She never said anything about it, and weight was something we pretty much ignored, but when mine started dropping, she was inspired to do something about her own, and that thrilled me.

I did not put any pressure on her, nor did I lecture her about calories or snacks or this or that. I did not forbid her from any foods or put padlocks on the fridge and cupboards. What I did do was share what tips I had learned myself, and I continued my own weight loss journey to be a quiet example to her. She used a similar software program to calculate her calorie needs, then began to keep track. Being a rather independent kid, she pretty much made her own breakfast and lunch already, and she started changing those, making sure her food was in the right proportions to fit in her calorie counts. She gave up some things she knew were bad for her, and she started using her Dance, Dance Revolution game to burn calories once in a while. The pounds began coming off her, and that impressed me so much. I was a fat teenager myself, and I know I never would have had the wherewithal to lose weight like she did. Now, because I was dieting myself, many might have thought it was a case of her mom "making her" diet and lose weight, but nothing could be farther from the truth. If anything, HER weight loss only spurred me on to continue with my own. If my little girl was going to put in the work to be healthier and happier, there was no way I was going to revert back to McDonald's and eating entire boxes of Cheez-its or handfuls of Oreos while watching my dumb reality TV shows at night.

Cissy started several months after me, so she still has about 50 or 60 pounds she wants to lose. She is shorter than me, about five-five, and she started out weighing 270 pounds at age 16. She weighs herself every Saturday. Sometimes she reports her results to me, and sometimes she doesn't, and I leave that up to her and don't pester her about it, except to encourage her when I can. Yesterday, my little girl, who is 18 now, weighed in at 193.6 pounds, representing a loss of more than 75 pounds since she started! That is no easy feat for a teenager (or anyone), particularly one who leads a relatively sedentary life of online schooling, with a mom who's stuck working on her laptop. I am so very proud of her, and she is looking forward to looking and feeling better when she graduates this spring.

So what's the point of this dieting duo story? Simple: Sometimes we inspire our kids, and sometimes they inspire us. In our case, I guess it's both. On those days when I'm tempted to buy those cookies or run through that drive-thru, I think of my daughter. I think, "If I put those sweets in the house or let the smell of those fries waft around our Corolla, it will put unnecessary temptation and pressure on her that might jeopardize her efforts, as well as my own. If I get fat again, what will that say to her?" I love my daughter too much to sabotage what she's done, and that love for her and pride in what she's achieved thus far helps me stay on track too. We mess up sometimes, and we allow ourselves "cheat days" on special occasions and holidays, but we each control our own breakfast and lunch and snacks, we make smarter choices together at the grocery, and I make sure our dinners are never one calorie over 400...and that is how we've lost 241.4 pounds together thus far! 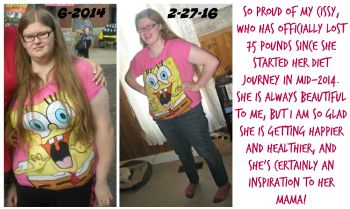