Forgive me for treading into a touchy subject here, but I'm going to. No, it's not politics; suffice it to say that I'm equally terrified of Trump and Hillary, but I will cast my vote in the end for the lesser of the evils. (Sad that we've reached that point, but no one thought to clone Ronnie Reagan back in the eighties.) The subject today is religion. Yes, that's right. I'm going to mention taboo things like faith, God, prayer, and - gasp! - the Bible here. If that offends you and you wish to unfriend me, that's your prerogative, but I have no shame in my beliefs, and I can wholeheartedly say that on my diet journey, God has been with me every ounce of the weigh (pun intended). He did not pile the pounds on me, but I believe He has had an integral role in helping me take them off. I especially know this when I see weight loss I really don't deserve, loss that defies all caloric logic, as was the case this morning.

There. With the warning/disclaimer out of the way, let me delve into a facet of my Christianity that is very important: confession. I'm not Catholic, but even I know that it's good for the soul. So...here goes... 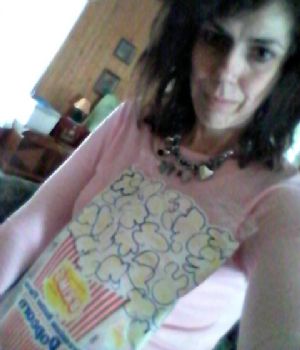 Last night, as per the attached photographic evidence, I felt a snacking urge - that deep, nagging kind that comes at bedtime, when I can't fall asleep fast enough to avoid it. I hate that niggling feeling, those moments when my brain insists on going through the grocery list of what's in the kitchen, trying to reason with me that this or that isn't "that bad" and won't hurt my diet "that much." I was having an uninvited visit from my old friend Insomnia, who seems to have some sort of stalking crush on me, and I was flipping through Hulu, trying to find something to numb the thoughts in my head. I settled on Law and Order SVU. Unfortunately, there was nothing lawful or orderly about what I did next.

Corn is a vegetable, right? Of course it is! However, corn in a bag, popped and covered with some sort of buttery substance that makes it unnaturally yellow, then doused with an inhumane amount of salt, is about as far from organic as one can get. Nevertheless, my stubborn brain convinced me that it wouldn't be "that bad." Even worse, it convinced me that I'd be able to stop at a 170-calorie serving. I should have known better, since I'm a bit of a salty/savory snack binger; I'll take chips over cheesecake any day. By the end of that binge, I'd eaten over 900 calories worth of popcorn - and it wasn't even the healthier kind, air-popped with a little Molly McButter. It wasn't even the lite microwave variety. No, this was the $1 giant bag of buttery, evil popped corn that I always buy at Family Dollar, because a cup of it is only 56 calories and is usually enough to take the edge off my salt craving. Unfortunately, last night's craving turned into a buffet. By the time I dozed off, what had started as a successful day of staying in my calorie range (when I initially went to bed, I'd eaten only 1,197 of my 1,200 and was quite proud of myself for that) ended up being somewhere in the neighborhood of a 1,000-plus-calorie overage. In that one binge, I ate almost a day's worth of calories.

To make matters worse, I weigh in on Wednesdays. My brain, being the passive-aggressive jerk it often is, went from telling me "Oh, c'mon. It's just popcorn. It's not that bad. At least it's not ice cream and chocolate and Doritos, right?" to "What the heck is wrong with you, chowing down a giant bag of popcorn the night before a weigh-in? You're NEVER gonna lose those last 9 pounds to get to that goal you've been working toward for over 2 years." There's this anti-bullying initiative these days, right? Why hasn't anyone mentioned this to my crazy head?

After what I now refer to as Popcorngate, I was scared of my scale this morning. I have a lot of pressure on myself right now. I am going to divorce court on March 28, and for reasons that are very difficult to explain without a couch and a Freud-looking individual taking notes and charging me $300 an hour, I want to hit my goal of 155 pounds by then. No, forget the "want"; I NEED to hit it, for my own mental health. The divorce and the goal weight are giant hurdles in my life, and I want to leap past them together. Besides, I want to look smashing in front of the judge and might even buy a new dress for the occasion! Anyway...I was depressed when I approached the bathroom scale at promptly 7:14 a.m. today, thinking the popcorn incident had surely blown my chances of losing that nasty 9 before divorce day. 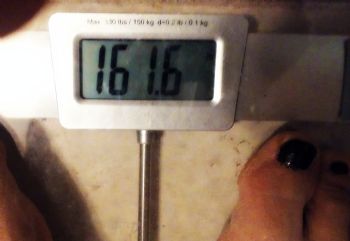 My scale is a talking one, with a British lady voice. I did it on purpose, because she reminds me of the mean host of The Weakest Link, so I figured that audible sound of my weight in that voice would help keep me in line. (I really wish there was an app to have Gordon Ramsay yelling at me when I overeat, but I haven't found one yet. Besides, he just makes me want risotto.) Today, I feared the voice, so I turned off the audibles. I glanced down at that number, expecting a gain, and - lo and behold - there was a loss! A big one! An unbelievable one! A definitely-not-deserved one! A loss that can ONLY be attributed to God stepping in once again to help me, even when I've gotten in my own big, fat way. I lost 2.4 pounds in a week, over 2 years into my journey, which is really no small feat, and I have to say that it is a miracle that could only have been accomplished by some sort of divine intervention. I started at 329 pounds, just one pound less than the capacity of that mean talking scale, and today, I was 161.6 pounds, the lowest weight I've been in at least 14 years.

I pray a lot - about everything. I'm a worrywart and more neurotic than most people. My ex-husband (who I am really starting to consider more of a Why? than an ex) wisely used to call it "chicken-littling," said all my worrying and freaking out was exasperating (he was right about some things). I am a woman of great faith, but I'm seriously good at hiding it. I'm always telling my nonbeliever friends that I know God will take care of me, yet in the next breath I'm whining to them about the sky falling. It is really no different with my weight loss. I pray to my Father about everything, so of course my health/weight is one of those things. It's a bit hypocritical, I know, to ask God to help me hit my goals, then devour enough snacks to feed an entire daycare. It's horrible to get on Spark and hear from so many people how inspiring my story is, then to turn around and gulp down 1,000 calories of butter and salt. There is a Bible verse that says "But I discipline my body and bring it into subjection, lest when I have preached to others, I should myself be disqualified" (1 Corinthians 9:27), and I've been very guilty of not adhering to that. For all these reasons, I'm sure I have God face-palming at me daily, yet the pounds came off, and there is something very humbling and inspiring about that.

For those of you in the midst of this battle, there are a couple things I want you to know. First and foremost, you are NOT alone on your quest. Your Creator WANTS you to be healthy, even if you feel your weight is your problem or that you caused it (which is really true for all of us). Second, God trumps anything you can do to damage your own efforts. This is not to say you can head out to the Chinese buffet and eat your weight in rangoons and God will snap his magic fingers and have you looking like a supermodel, but it should encourage you that even if you mess up - which we ALL do - He is still on your side. He will not quit your weight loss journey, because it is a journey He wants you to take toward better health and happiness, so you should not quit either, even if you wake up with popcorn crumbs in your bed. Thank Him for your losses, pray through your plateaus and gains, and never, ever give up on Him or yourself!
Share This Post With Others
Report Inappropriate Blog
Member Comments About This Blog Post