The Scales Have Spoken 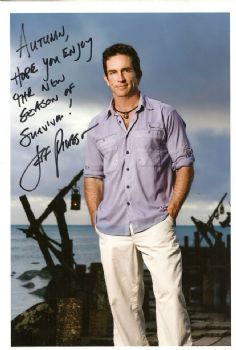 I have a lot of vices. Really. Unfortunately, many of them are foods that I just have no willpower with and must avoid entirely so I don't scarf down the whole package. These foods, which are no longer invited in my home, except on very rare, very special occasions, include things like fast food (I cannot tell you how much I love French fries dipped in the tartar sauce of my Filet O Fish), muenster cheese, Reese's Cups, and Ruffles with heaping scoops of french onion chip dip. Another vice of mine, sadly enough, are so-called "reality" shows (which are about as far from reality as one can get). I am madly in love with Chef Ramsay and watch all of his shows (I don't know why, since I usually don't even prefer blonds, but I have some strange crush on angry men with Scottish accents yelling about beef Wellington), but the one show I've watched almost religiously for every one of its 31-plus seasons is SURVIVOR. I have this super nerdy hobby of collecting signed celebrity photos, and of all those I have, my Jeff Propst is my absolute favorite. I don't know what it is about the show that entices me so much, because it is a bit contrived and ridiculous, with all those mostly beautiful people bouncing around the beach in their speedos and bikinis, but I love it and have only missed one season in the last umpteen years. Everyone in my life knows not to bother me when SURVIVOR is on; I'm thinking the Rapture could happen and I'd ask Gabriel, "Hey, can you hold on with that trumpet? They're just about to vote!" Sad, I know, but at my age, I'm not making any apologies for these harmless vices.

So, why am I telling you about some silly island-themed reality show? Simple: The theme of SURVIVOR very much applies to what we, as people on a weight loss journey, need to do. We have to outwit, outplay, and outlast, folks! After over two years of being at this calorie-counting, Nutrition Tracker-using quest, I am well aware of how important all three aspects are, especially for those who have a LOT of weight to lose. When I started out, I was looking at needing to lose around 175 pounds - a whole person or at least a couple supermodels. It seemed impossible that I could ever vote that many pounds off the island. Now, I know it's not impossible, but it does take effort, tenacity, prayer, encouragement, and a willingness to get back up when you trip. There are no immunity idols in weight loss, people! When the scales have spoken, you will see the results of that effort or lack thereof. Let's look at these SURVIVOR skills for a minute.

OUTWIT. Yesterday, I was at Dollar General to buy some necessities like dog food and laundry soap. I generally don't go to that store much simply because the yellow carts and bags and signs severely bother my inner xanthophobe (seriously!). In the front of the store, I saw another of my vices: a clearance cart full of 90% off items! In that cart, I spotted individually wrapped popcorn balls for a nickel a piece! How could I resist? I did take a quick look at the nutrition info before I bought them, and I was happy to spy "120 calories." My budget works pretty much this way: 300 calories for breakfast and lunch, 400 calories for dinner, and 200 calories or less for snacks. Thus, individually wrapped snacks in the 100-120-calories-or-less range work well for me. I was stoked to find those for five cents, and I quickly grabbed four of them for my snack cupboard. Unfortunately, when I got home and started putting things away, something else on the label caught my eye: "Serving Size: 1/2 popcorn ball." What!? You mean that yummy nickel snack I got is actually 240 calories, almost the calorie cost of a whole meal? Sigh. This is where OUTWIT comes into play. Dieting is as much brains and paying attention, keeping your wits about you, as anything else. 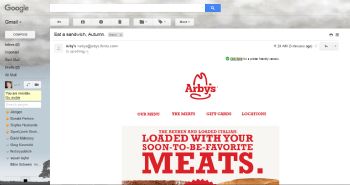 OUTPLAY. On SURVIVOR, tribes compete at first, till it becomes an every-player-for-him/herself game. In the case of losing weight, our competitors are actually all around us. Yesterday in my email, just after my weigh-in, I got an email from Arby's with a subject line that literally read, like some sort of macabre command from Satan himself: "Autumn, eat a sandwich." In that email was a picture of oozy, yummy, cheesy, greasy, huge, insanely high-calorie, triple-meat Reubens, maybe my favorite sandwich in the universe next to the Friendly's Fishmajig (which ALWAYS had to be accompanied by a coffee Fribble, mind you). Fast food places are always smacking us with dollar menus. You can't pay for your gas inside without walking the gauntlet of candy bars, bags of chips, and greasy, delicious polish sausages and taquitos on the hot rollers, assaulting your eyes and your nostrils. You have to OUTPLAY all these temptations, to be stronger than they are, and that isn't easy. 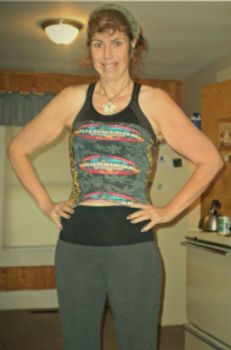 OUTLAST. I already mentioned that I've been on my program for over two years. I started on January 1, 2014, a really long time ago. Since then, I've been through a lot. I've been trying to finalize a divorce. I lost my parents kind of early and somewhat unexpectedly, in their sixties, in June and November of 2015. My business (I'm a gig-to-gig, self-employed freelancer) has taken a lot of hits due to all the trauma of everything distracting me, and like everyone else in the universe, there are the daily issues like car problems, sickness, bills, taxes, errands, etc. and so on. Through all these ups and downs, it can be a huge struggle to keep my weight loss journey at the forefront of my thoughts. It's very easy to backburner it, to say, "I'm much too busy / distracted / sad / tired / annoyed to bother putting my calories in Spark today," or, "I'll just calculate it in my head. Who needs that software anyway? It's such a pain to track EVERY calorie." The longer you stay on the program, the easier it is to start neglecting the things that work. I know this firsthand. During my journey, there have been times when I fell off the wagon, and there have been times when I rebelliously or nonchalantly jumped off. The key is that you have to OUTLAST those feelings. You have to get back up. There is a difference between failing and falling, and that difference really is "I" (See what I did there, playing with letters?) You have to say, "I will get back up. I will outlast this temporary setback. I will not give up!" By virtue of not giving up, more than anything else, I've taken off 167.4 of those 175-ish pounds I set out to lose, and I'm starting to feel like a survivor myself! (Gee. I wish CBS would give ME a million bucks! Think of how many five-cent popcorn balls I could buy!)

So, yeah, it's really all about being a survivor, and I wish each and every one of you well on your quest to outwit, outplay, and outlast so you can smile the next time the scales have spoken!
Share This Post With Others
Report Inappropriate Blog
Member Comments About This Blog Post