"A Cop Squished My Capybara!" 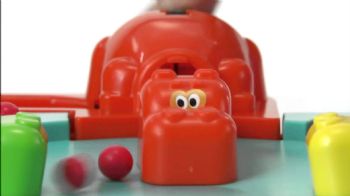 When I went to bed last night, the last thing I looked at before I closed my eyes (well, other than flickers of the television) was my Spark app on my phone, telling me that I'd overeaten by 154 calories. Not a big deal, right? Wrong! I am 7-ish pounds away from a goal I've been working toward for over two years, and any overage makes me so angry with myself (or at Jean Claude Van-Damme, since I was watching KICKBOXER and playing HUNGRY HIPPOS with the kiddo while I acted like a hungry hippo and devoured a box of Conversation Hearts and some Pretzel Crisps to throw myself over). 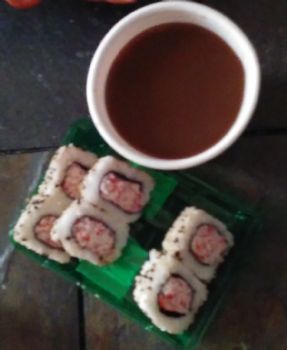 For the past several months, since at least mid-November, I have yet to go a whole week adhering to my 1,200-calorie budget every day. Every week, at least once a week, I screw up. It makes me wonder how I've taken off any weight at all. I know the program "works if you work it," but I'm guilty of not working it all the time, as consistently as I could. My only solace is that this time, it was only 154 calories over, and not 1,000 calories over like I did one day last week. Today I'll do better, even if I did have supermarket sushi and coffee with a sugar packet for lunch.

I realize I post a lot on Spark these days, and I post a lot of pictures of myself. In some ways, I see how this may seem arrogant or braggish, but I actually feel quite the opposite. Because of my frequent falls and my rebellious waywardness, as well as the fact that I don't exercise, don't eat fresh/raw/organic/natural purposefully, and barely move more than the length of my 900-square-foot house most of the day (my only real physical activity most of the time is typing, blinking, and having a pulse), I don't feel I "deserve" to have lost anything, yet here I am, taking up less than half the loveseat. Heck, when I started out in 2014, the loveseat was more like a chair for one. Now, if I had anyone to cuddle with on it, there'd be room for at least two. This surprises me greatly, as I never thought this would be the case, but I digress... 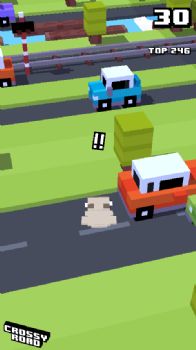 Recently, I was playing CROSSY ROADS, a game I am sadly addicted to. Maybe it's because I grew up in the early videogame era, when we spent hours trying to get that really awful-looking, low-resolution-graphics chicken across the road in FREEWAY on our Atari. Maybe it is because I am a former TETRIS master (I seriously once won $50 beating a 12-year-old in a TETRIS tournament!) and the game reminds me of similar hand-eye coordination skills. In any case, I get frustrated when my characters get squished, and I am compelled to play again and again until I beat my score, collect more coins, or unlock some sort of bonus character. I am 45-year-old woman on a mission to find the abominable snowman and get killed by one of his snowballs so I can unlock a Yeti. Seriously! My daughter, whose best friend is her Xbox One, recently looked at me quite strangely when I furiously announced, "A cop just squished my capybara!" But I'm one of those people who tries to take lessons from everything, and CROSSY ROADS is no exclusion. 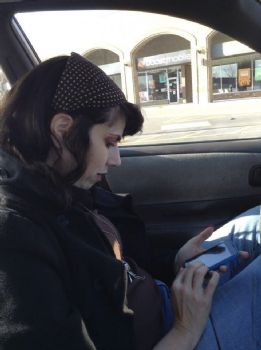 If someone asks (which many do), "How have you lost all that weight?" I imagine they expect me to say I have replaced all my meals with kale smoothies and that I've joined a gym. Maybe they think I have a secret workout room in my garage or that I'm making myself throw up or that I sneaked off and had some sort of liposuction or bypass surgery without anyone knowing. Perhaps some imagine that I'm drinking a gallon of water a day and taking handfuls of laxatives or weight loss pills or that I've given up every single food and beverage that offers any taste or enjoyment at all. This is simply not the case. There are four things I have done in my weight loss journey, and they have worked, just as they work on CROSSY ROADS: 1) I try to learn from mistakes so I don't repeat them; 2) I forgive myself if I do make mistakes (which I find very difficult, because I am very self-deprecating in general); 3) I set mini-goals so I always have something to work for; and 4) (and perhaps most importantly) I get back up and try again, no matter how many times I screw up. If you catch me playing CROSSY ROADS, I will likely have an intense look on my face, like I'm trying to solve some sort of insanely difficult calculus problem, because I am intent on trying again and again and trying to do better than I did before. I believe, more than anything else, that this is how I've taken off this weight. I am not some freak of nature, some miracle-worker (I leave those to the good Lord), or some know-it-all weight-loss guru. I am just someone who has stuck with it for the long haul and tried and tried again.

Why did the chicken cross the road? To get to the other side? Maybe, but that's not the point. The point is that the chicken set a goal and chased after it, in spite of trucks and taxis that could get in the clucker's way (or weigh, as it were). All these years later, we're still asking about that chicken, so we can assume that feathered one has tried and tried again. Set your goals, learn from your mistakes, forgive yourself for those minor mess-ups, and keep on hopping. That, more than anything is what will get you where you want to be, whether that's crossing the street, unlocking a Yeti, or fitting into those skinny jeans.
Share This Post With Others
Report Inappropriate Blog
Member Comments About This Blog Post