Stupid Scale! How Dare You Spring Forward Instead of Falling Back!

My daughter weighs in on Saturdays. Her weight loss journey has been a major aspect of the success of my own, because we both inspire each other. When one of us catches the other heading toward the snack cupboard after we've surpassed the daily feed limit, arched eyebrows ensue, and that usually does the trick. If we ignore the arched eyebrows and proceed toward the pretzels and granola bars, we both know that the British lady on our scale will have something to say about that. The trouble comes when we stay within our calories, give or take a very few, and the British lady is still nasty come weigh-in day. Today is such a day for my poor kiddo. She stuck to her calories, with a few very minor exceptions, last week, and she gained 2.2 lbs. I could tell by the look on her face when she left the bathroom that the news was not good, and I felt for her. As her mama, I'd gladly take that 2.2 lbs. from her if I could, but unfortunately, they haven't yet mastered the science of family fat transfer.

To make her feel better, I first reminded her that she's lost over 75 lbs. Really! As a teenager, completely self-directed! We then Googled around a little to see why someone would gain weight even if they are staying within their daily dieting calorie range. As it turns out, there are many reasons for this. For one thing, there's salt, which causes us to retain water; we eat a lot of processed food (I know, I know!), particularly during weeks like this last one, when we were very busy and eating on the run. For another thing, there is stress, which causes all sorts of mayhem on the waistline, and the kiddo was pretty stressed out this week with schoolwork and some out-of-the-ordinary chores and tasks and issues we had to deal with. I assured her she can blame George Orwell for part of that gain, since reading about his Proles and having to take tests on them have stressed her out this week. There is also the simple issue that everyone's metabolism is different, and even in the same individual, metabolism can spike and fall at different times, due to countless factors, which is why some people gain weight just by walking past the sugary stuff in the grocery store and others can graze on it all day without gaining an ounce. (My brother is one of those people, and I detest him for it, but I'll have to discuss it with the Creator when I get there.) In any event, there are countless reasons why the scale might spring forward instead of falling back, even when you've been a really good girl all week. 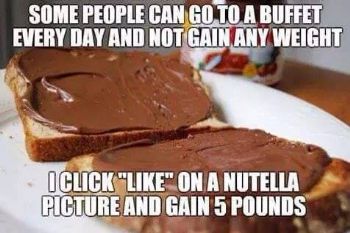 Here's the thing we need to remember: When you are NOT being such a good girl, and you have some sort of collision with a buffet or a cake at a wedding or far too many pieces of Grandma's pie at a family gathering or mounds of macaroni at the church potluck, you might be pleasantly surprised at your next weigh-in but not so pleasantly surprised at the one after. It can take a couple weeks for those gains to show; likewise, it can take a couple for the losses to show as well. The only thing you can do is keep doing what you know you should be doing. If you give up because of a gain, you are walking away from any success you have had, as well as any you might be blessed with in the future. This is what I told my kid this morning. Of course, at 18, she thinks she always knows more than Mom, so it earned me an eye-roll, but that's okay. I collect them, and when I tell her that, it only earns me another eye-roll for my collection (hee hee).

Today, whatever your weight is, you have a chance to continue doing right or start doing right so you will keep those scales falling back. Spring forward to success by keeping on keeping on! (Oh, and don't forget to set those clocks forward tonight so you aren't an hour late to that church potluck tomorrow!) 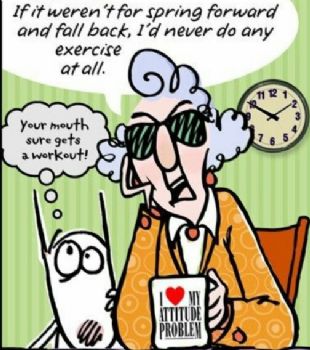