Yes, I'm Quoting Oprah Winfrey (and I Certainly Don't Like Her as Much as She Loves Bread)

Hey, everyone, guess what! Oprah Winfrey LOVES bread! Seriously! She eats it EVERY.SINGLE.DAY! I only know this because that stupid Weight Watchers commercial invades my Hulu at least six times a day. I like bread as much as anyone else, but I had no idea someone could be so emotional about it. 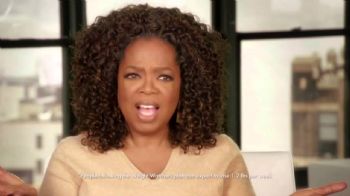 So many things about that commercial irk me, as someone who has lost weight WITHOUT paying some super-famous BUSINESS to count my calories (they just use a handy converter so they can call them "points" and make you think you're doing something different). I cannot stand programs like that, profit-hungry companies that exploit people's desperation to get healthy and thin. I cannot stand celebrities who roller-coaster through weights their whole lives, constantly touting this food or program or that one, the highest bidder at the moment, to convince people to spend money they don't need to spend. I cannot stand that people buy into it, forgetting that celebs have their own on-staff nutritionists and personal trainers to help them. Seriously, do you REALLY think OPRAH FREAKING WINFREY is eating the same $2 frozen meals she's telling us to eat? I like Smart Ones as much as any dieter, and I've got a few in my freezer right now, but I'm a smart enough one to know that the commercial is just that, an advertisement for something the paid spokesperson has probably never really used herself, an ad for a program that does not do all she pretends it can do, like counteracting eighteen loaves of foccaccia or sourdough. (If they had the nerve to be truthful, they'd leave that disclaimer on the bottom of the screen a whole lot longer, and in bigger print, so you'd see that when you pay WW or buy their foods, you still only typically stand to lose about as much per week as the average bowel movement can accomplish). It's also bothersome that when she declares, "This is the joy" and raises her arms, her flabby bat wings wobble as much as mine.

I cannot stand Oprah or her channel or her magazine for various reasons, but what really irks me is that she actually said (or recited or read off a cue card, rather) something INTELLIGENT in that carefully scripted commercial. What was this rare gym of insightfulness? "I now just manage it, so...I don't deny myself bread." This is a major key of any weight loss journey, and you don't need to pay Weight Watchers for advice like this.

Today is St. Patrick's Day. I am not Catholic, so I admit I don't really understand most modern things that begin with "St.," other than the ones I see in front of some of the names in the Bible I look at daily. Whoever Patrick was, I am sure he was a wonderful person and that there are good reasons for a day to be named after him. Nevertheless, like a great majority of people who do something celebratory on holidays invented by faiths they are not part of, I usually try to throw in something green on this day. I don't walk around dressed like a leprechaun or anything, and I didn't spend my morning looking for four-leaf clovers, but I did swing through McDonald's while running errands this morning. "Why would you do such a thing?" you ask. "It's like a recovering alkie going to an open bar, right? Why would you put yourself within arm's reach of fries and Big Macs and Mc-this and Mc-that? How could you!?" Simple: Because when it comes to treats and celebrations, I now JUST MANAGE IT. 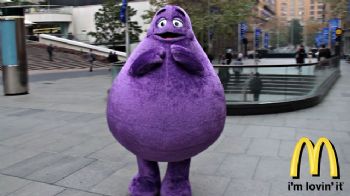 Before I drove into that evil drive-thru, I pulled out my Smartphone and somehow managed to use the "Ok, Google" voice app without my daughter there to walk me through it (I am not too fond of modern gadgets and am often tempted to stomp mine to smithereens and go buy a rotary phone because I cannot figure all the stupid touch-screen options out). I asked, "Okay, Google...how many calories are in a small Shamrock Shake?" Sure, there are all those DIY recipes for making your own lighter Shamrock Shakes, but on a holiday, I want the real thing. I was shocked, heartbroken, awed, and disgusted at the answer that came from that robo-chick voice: "A small Shamrock Shake from McDonald's contains 530 calories." What!? Five-freaking-hundred-freaking
-thirty!? That's almost two meals' worth. What's that clown trying to do to us anyway? Make us all look like Grimace? (For you young'ns, that is the big, bottom-heavy purple thing that has a figure like an eggplant.) Then I thought, Hmm. How can I manage it? Here's how: 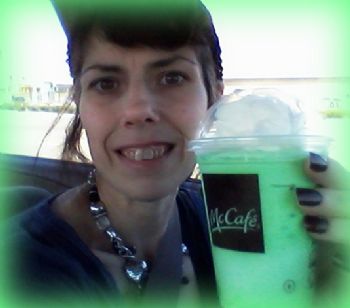 Two-freaking-hundred-sixty-f
ive is far better than 530 any day, so I "managed it" by buying that creamy, minty cup-o'-goodness and asked for two straws, then took it home and split it with my daughter. Erin go Bragh! We're part-Irish, so it only made sense that we had a part-St. Patty's shake, and it was like our own little pot o' gold! We won't be able to invade the snack cupboard today, because that tasty treat gobbled up our snack budget, but it was a wonderful break from the norm. 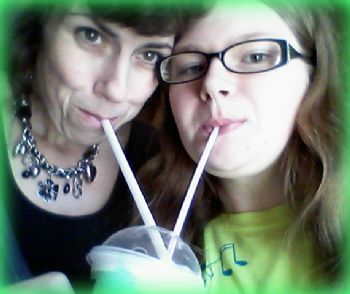 So, as much as I hate to say it, maybe Oprah's PR writers are on to something. Managing it really is a key, and because you CAN manage it in ways like sharing or settling for a little less, you can occasionally treat yourself. I don't really believe in luck, but I wish you lots of it as you learn to manage your cravings, because when it comes right down to it, "This is the JOY!": knowing that you CAN have whatever you want, without looking like a doughboy or jiggling like a shake, as long as you manage it.