That Red Crate in My Closet... 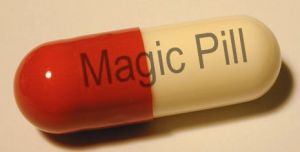 I have learned so many things about how to manipulate my own thinking and behavior during my weight loss journey, and one of the most important aspects for me has been setting various "mini-goals" all along the way. When you are in any long-term plan to change a major part of your life (and trust me when I say 174 lbs. is a pretty major chunk - and I DO mean chunk), it is important to realize that you are not going to complete that goal overnight. Wouldn't that be nice if you could? I'm not opposed to putting in a little hard work and willpower, but if Pfizer were to create some sort of Morning After the Chinese Buffet pill, I'd be all over it. (Wait. No I wouldn't. I despise Big Pharm and spend a great deal of my life trying to avoid giving them a cent for their side effects-laden toxic waste so neatly tucked in all those capsules and tablets, but that's a topic for another blog.) Anyway, I digress. (Gee, I sure do a lot of digressing, don't I? Sorry about that. My morning rendezvous with my boyfriend always makes me loopy for a while, like some silly schoolgirl, and I tend to ramble and giggle and talk (or type) my way down a thousand different rabbit trails. Just be thankful you don't have to put up with me in person! How many calories does digressing burn anyway?) 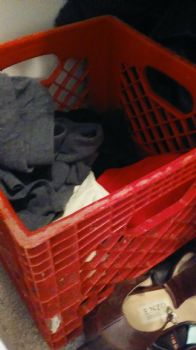 Back to what I was saying... Mini-goals are important, no matter what they are or if they seem silly, self-involved, or pointless to those around you. One of my biggest motivators has been the red milk crate in my closet, what I refer to as my "Get-Into" or "Skinny" Crate. (I capitalize it because it's been THAT important to any success I've had.) Now, I would like to place a disclaimer here to announce that I am certainly no kind of fashionista or cat-walker. I will not be appearing on AMERICA'S NEXT TOP MODEL or PROJECT RUNWAY anytime soon. (I really have no regrets about that, because Tyra greatly annoys me, and I've seen enough of Heidi now that she's got that unnecessary underwear commercial. Who needs to play guitar in her underwear on national television anyway? Not that I won't admit to a few air guitar session in the privacy of my room while I'm getting dressed and listening to my old 90s alternative on Pandora. I've burned more than my fair share of calories in private jam sessions with Nirvana and Offspring and Alanis and... Shoot! I REALLY must stop this digressing!) 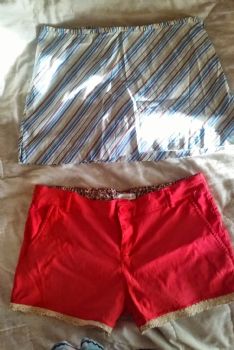 I began putting things into that little Get-Into Crate WAY back in 2014. I purposely bought (and inherited) some clothes in sizes that were laughable at the time. I distinctly remember looking at this little striped skort and thinking it was meant for a third-grader. The salmon-colored shorts looked even smaller, like something off one of those old NAIR "Who Wears Short Shorts?" commercials. I found an adorable, classy-looking brown dress on Ebay for a few bucks (brown is one of my favorites, as it appeals to my relatively dim taste in colors, looks like chocolate, reminds me of my mom, who adored it, and tends to bring out my brown hair and eyes and detract from the prevalence of those grays I have to Clairol every few weeks), but it had an "M" on the size tag; back in the days when I was over 300 lbs. that "M" might as well have meant "Mooove on, cow lady, because this dress will never, ever fit you." Somewhere along the line, I added a few tiny t-shirts and even a pair of really skinny leather-looking leggings that wouldn't even slide up beyond my heel at the time. I'm no fashionista, but I do like to play around with my wardrobe, and I wanted that Skinny Crate to give me something to work for. 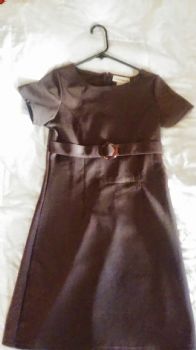 This morning, when I was hiding my daughter's Easter presents in the closet behind the humongous piles of shoes and a couple Christmas teddy bears that live in there till the holidays, I took a glance at that red crate. It's almost empty! Why? Because many of the things that were in it are now in my dresser drawers, things I can actually wear. Even better, some of them got too big and have already been worn a while and then passed on to the Salvation Army, so maybe they'll end up in someone else's red crate for a while. Since I'm almost at my goal weight, I haven't been adding things to the crate, but that striped skort and those little salmon shorts (mmm...salmon. Guess what's for dinner!) will be part of my summer wardrobe. Those horribly-too-young-for-me leggings may go with me to the 80s Fest at the park later this year. (Won't they look great with a florescent shirt, a few neon bangles, some giant, gaudy earrings, big hair, and animal-print heels!?).

As for that chocolatey brown dress, I tried it on just last night. It doesn't fit super comfortably just yet, but I was pleasantly surprised that I could even get in it and zip it, because when I first bought it, I couldn't even get it over my head without involving a crane and a chiropractor. It's still a little too snug, like something Julia Roberts might have worn in the early moments of PRETTY WOMAN, but it is now my Goal Weight Garment, and I fully intend to wear it the first Sunday after I hit my goal weight, which I hope is by the end of this month or shortly thereafter! I even have brown tights, jewelry, and shoes ready to go with it. As soon as I'm comfortable with how it fits, I'll post a pic of myself in it so you can all share in my Get-Into glee. Heck, if I squeeze into it easier by Easter Sunday, I might just eat a chocolate egg in celebration (after I zip the dress up, of course). 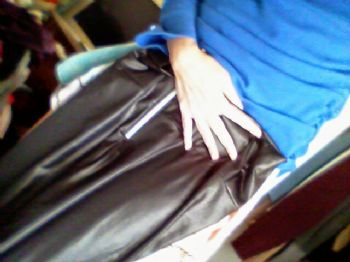 My advice to you today is this: Whatever weight you are, whatever gender you are (guys wear clothes, too, right? Well, most of them anyway...and thank goodness Richard Hatch did on THE BIGGEST LOSER, because I saw enough of him on SURVIVOR already), buy something for yourself that is too small right now. In fact, buy a few things (for which I highly recommend thrift stores, which I love almost as much as chocolate), several versions of too small, so you can reward yourself with wearing them as you shrink. Then, every few weeks or weigh-ins, go through that Get-Into Crate and see what little pretty presents you can give yourself. Each and every time you fit into one of those "too-small" things, it will validate that you ARE making a difference, one that is noticeable and real. When those too-small things become too-big things, you'll be even more amazed and motivated! If you're not fond of having a milk crate in your closet or clothes are just not your thing, find some other way to help you visibly see the differences you are making. When you've looked at such a large reflection for so long, it isn't always easy to accept that there's a smaller one there. I know, because when I squeezed into that brown dress last night and stood in front of my bedroom mirror, tears actually came to my eyes, and I looked over at my daughter and said, "Is that really me? How did I get here?" to which she responded, "By working hard, Mom." Pleather leggings and short-shorts and snuggy-snug brown dresses might not be your thing, but find something tangible and visible that makes you feel good about yourself, something that will help you see and realize what all your hard work is about and give you the motivation to keep going till that Get-Into Crate becomes an empty Already-Got-Into Crate and you can pull it out of the closet and use it for something else.
Share This Post With Others
Report Inappropriate Blog
Member Comments About This Blog Post