Registered for the race and being dumb


I finally got entered into the race for the weekend, I was worried that we had missed it but they finally got the site working again so on Sunday I'll do my first 10K. I laughed at my husband afterwards, I picked a race that doesn't give out t-shirts or medals to do my first 10K. Grrr...at least I'll have my bib to put up.

Since I didn't do any running while we were on vacation I decided to get back into the swing of things after the Farmers Market on Saturday. I was tired and knew it would perk me up if I hit the trails. Sure I had a bit of a headache but I didn't think much of that. That would be the dumb part.

Less than 1K into the race my head started to pound. By the time I hit 1.5K it was throbbing and flashing lights told me that it was a migraine, not just a headache. I felt bad for the person I asked to come running with me because at the 2K mark I had to stop running and slow to a walk. When I got home I walked in, announced to my husband I had a migraine. He offered to go put fresh sheets on the bed so I could have a nap, I was sound asleep on the couch before he could finish. I slept for 3 hours. Running with a migraine, dumb, so incredibly dumb.

My head is just starting to clear today and as much as I want to run I have a feeling it would still be a bad idea so I'll try the treadmill instead and see if I can get a short run in on that. Funny, I wasn't the least bit nervous about the race before I went on vacation, I was doing 7K trail runs. But that run with my friend set me off a bit, something was said and I know it wasn't meant to be hurtful but she has a way of saying things that are demotivating but she doesn't realize it. Not everyone is a cheerleader, even the nicest of people.

And then there's this which makes everything just so much better. 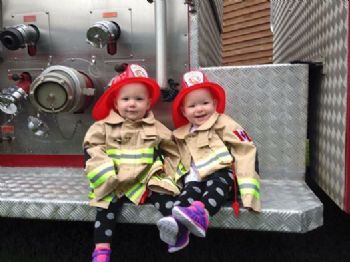