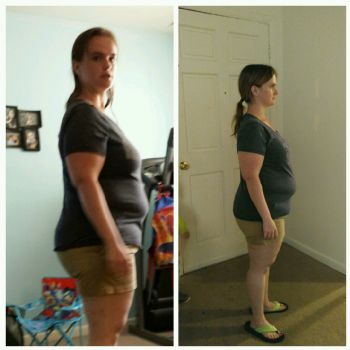 As my friends know, I have been doing Whole30 for 27 days. So close to the end! If you don't know about it, Whole30 is a 30 day "cleanse" where you don't eat any dairy, any legumes, any soy, any added sugar of any kind and avoid processed foods.

I have been feeling amazing on it. I mostly started it due to issues with IBS which have virtually disappeared over the last three weeks. I have felt lean and healthy.

Until I got the bright idea to put on the same outfit I wore in a photo last year. And take a progress pic.

Holy crap, I look bigger in the new pic! To my eye, anyway. The first one, with all the stuff in the background, is from May 2015. The new one is from last weekish. My belly looks even worse!

I checked my measurements against the ones I have on Spark from around May of last year. Waist is one inch bigger. Upper arm is bigger. Hips are the same. Neck is smaller.

Well, you aren't supposed to weigh or measure on Whole30. I won't weigh in until Wednesday, which is the first day after. But this makes me really sad. To be fair, these are improved over where I was last month; spring/summer of 2015 were low points on all my recent measurements.

I will need to get over this. It just sucks right now.
Share This Post With Others
Report Inappropriate Blog
Member Comments About This Blog Post