There’s a lot of sayings about apples, but one thing is true no matter where you are. Apples are absolutely delicious, and they’re a healthy addition to anyone’s diet. (Well, unless you’re allergic, but let’s not talk about the corner cases, hmm?). The history of the apple goes back a long way, and can be traced all the way back to present-day Turkey, and from there they’ve spread out across the entire world to become one of the most ubiquitous fruits ever.

History of International Eat An Apple Day
International Eat An Apple Day has its roots in thousands of cultural celebrations around the globe where the apple is honored. It’s presence in multiple mythologies shows how important it was, to the Norse the goddess Iðunn gave out apples that granted eternal youth, a story that carried over to the Greeks in one of the 12 Labours of Heracles, where he was sent to pick a golden apple off the Tree of Life in the Garden of Hesperides. An apple was also responsible for the start of the Trojan War, tipped off in a feud over who was the most beautiful.

Apples are delicious, and are part of the identity of many countries food cultures. Consider the American Apple Pie, so much a part of their identity that it to state something is truly, fundamentally American, people have been known to state “As American As Apple Pie.” Apple dumplings, Apple Custards, Caramel Apples at Halloween, these delicious fruits appear all over the map as part of peoples favorite treats. Ireland was even known to make a Beef Apple Stew that decidedly had its own flavor pallet, sweet instead of savory. International Eat An Apple Day encourages you to share in these experiences, and perhaps create some of your own.

How to celebrate International Eat An Apple Day
The best way to celebrate is right there in the name. Eat an apple! 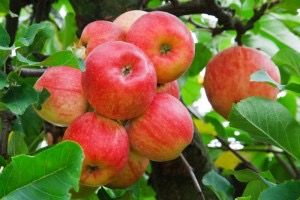