So, in my previous blogs, I talked about marriage issues. I no longer have them.

In August of 2013, I re-connected with an old friend from high school. We hit it off and by April of 2014, I had divorce proceedings started. No, my old friend had nothing to do with it. In December of 2014, my divorce was final. I was living with Gary at this time, but strictly on a friend and business partner idea.

That changed in May of 2014. We became a couple. I didn't move in with him to fall in love, but to get back on my feet. See, when I got divorced, I gave up everything for my sanity. My house, my horses, my dog rescue, eventually even my job. In May, we discovered that we were more than friends.

He's everything I have ever wanted. He loves me and puts up with me. He plays keyboard for me. He wants to build us a house. I couldn't ask for anything more.

As for the ex, he actually followed me to the same town and for a while I had issues with him stalking my Facebook and even going by the house. I caught him in WalMart one day and put a stop to that. I haven't seen him since.

Gary and I play off each others weaknesses and strengths. What I wouldn't have given for that to happen 20 years ago, but things happen in Gods time and God knew when I needed Gary. I think we saved each others lives. 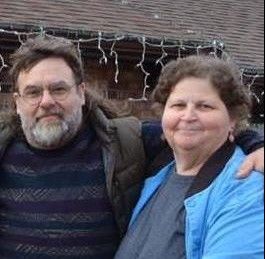