I Will Miss You My Spark Friend

I want to share my story because it actually began here on Sparkpeople. No its not about weightloss, its about friendship. I met a very special lady right here on Sparkpeople. We had joined the same team and start chatting on the team thread. We hit it off so we started emailing each other. Then that turned into texting and phone calls. I live in Michigan and she lived in Louisiana at the time and then she moved to Illinois. She did end up coming to visit for a weekend last year, so we finally had a chance to meet in person. We became so close that we felt more like sisters. We encouraged each other in our journey of getting healthier. We consoled each other with life's daily struggles. We even made plans for future trips together, even one of those trips being getting matching tattoos.

We texted everyday. On Monday she never responded to my text. Tuesday morning, her daughter called me to let me know that she was in the hospital with a high fever and pain in her head. She went into a coma and they had to put her on a ventilator. They told me that she would not survive. I was in shock. I felt helpless being so far away. Earlier that weekend, she had nothing wrong with her except for pain in her knee that was operated on months ago. All day Tuesday I thought of her and cried. When I went to bed, she was still on the vent and they were doing testing but nothing had changed.

I woke up Wednesday and I felt happy. I felt calm. This shocked me because of how terrible I felt yesterday and my friend was so far away dying. I realized it was her way of letting me know she was okay. That she was at peace. I received the news around 5 that they removed the vent and that she had passed away. The doctors said it was an infection that went into the brain. She had no knowledge of it until Monday when her head started to hurt and by Tuesday she was only being kept alive by the vent. It moved throughout her body that fast.

Thursday morning I woke up and before I headed to work, I stopped by my mailbox. Inside was a small package from my girlfriend. I just stared at it for a few minutes. She would send a random card now and then but usually would let me know if she was sending a package. Their was no note and I noticed that she had mailed it on Saturday. Inside was a necklace with a charm that had a picture of the symbol for Triple Moon. This symbol was something very important to my friend and meant a lot to her, she even had a tattoo of it on her neck. I knew in that moment even though she did not consciously know at the time she mailed it on Saturday that she would be gone by Wednesday, it was her way of saying that she was with me. It also is a reminder for me to stay on my path of getting healthy and learning more about my spirituality, which she was helping me with.

I am so thankful for meeting this special lady who has changed my life forever. I will never forget her or our friendship. Even in death, she will always be my Thelma to my Louise! 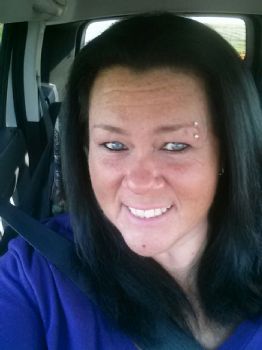 The necklace I received: 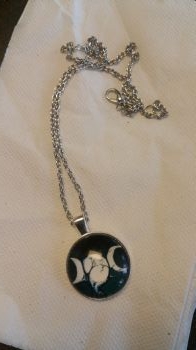 Anyone reading this, I encourage you to not take life for granted. Do the things you want to do, no matter what size you are. If you want to get healthy, get healthy. Stop waiting for tomorrow, because tomorrow may never come. And take time to get to know people, even if you only meet online. You never know what kind of friendship or even relationship may come from a few simple kind words. Live well and be happy!
Share This Post With Others
Report Inappropriate Blog
Member Comments About This Blog Post


Disclaimer: Weight loss results will vary from person to person. No individual result should be seen as a typical result of following the SparkPeople program.