I got a little frustrated this week when my Fitbit went out on me. It also happened to be the same day the internet was down at work. Being that I am the technology teacher, it made it even harder to function. I could not turn on my music on my phone either. Nothing was working, not Sparkpeople, nothing. What did I do? I moped and complained. I was frustrated because I had absolutely no access to anything that motivated me. By the time the internet did come back up, I was so behind on all my work, that I had no time to move anyway. When I got home, after being gone for 11 hours, I was exhausted. I ate and went to sleep.

The point, the all or nothing attitude got the best of me this week. Just because the Fitbit is not working doesn't mean you shouldn't move. Well, that's the sad reality I had this week. Yesterday I carried my phone around to track my steps. Not the same. No one to compete with, no one to cheer on, and I'm sure I took some steps without my phone in my hand, since I rarely carry it every where with me.

Next week, I'm moving regardless of whether or not the Fitbit is up and running. 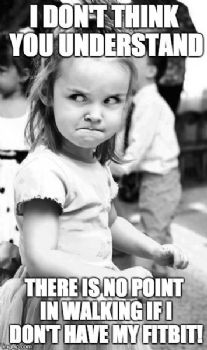