Just another day in my life....

I have been told more than once that I should write a story about my life. I think it was mostly a joke because I have had so many problems in my life. I have been physically, verbally, mentally and sexually abused for most of my life. I have had heartache that I thought would never heal when my second husband was murdered by a man that was one of his closest friends. Next came the wreck. I had to have 5 surgeries on my leg because it was pinned. So that put me on a walker for awhile. Then I got sick. First I was forced to quit my job because I kept falling asleep at my computer. Then I was diagnosed with severe sleep apnea. Then I got a cough that would not go away and my mother would say I was turning gray. So more testing and I was diagnosed with COPD and had to go on oxygen before the hospital would release me to go home. From there my health declined even more and I ended up in a wheelchair. I had pretty much given up at that point. Then it got worse. Just when you think it was getting better, I received another blow to my health. I had an aneurysm in my brain and needed surgery but the doctor here said I would never survive that surgery. He referred me to a neurosurgeon at my insistence. It was at that moment when he said I would not survive that my survival mode kicked in. I was not ready to die. I had already been exercising because he had told me if I lost some weight it would help my lungs dramatically. After the brain surgery, once the surgeon cleared me to exercise again I started working on my leg muscles and started walking. It was not very far at first but as I got stronger I worked up to 1 mile. I was ecstatic! So I set a goal to walk 5K in February. I did it! I was so sore for 2 days I could hardly walk but I did it and there was no going back. In March I walked 4 miles! I set a new goal to walk 5 miles by May 2oth. I am not so sure I am going to do it by that date now but I am not giving up. Then on the 10th of this month I went for a followup with the neurosurgeon and had a cat scan to see if the aneurysm was indeed gone. They came back and said I needed an MRI but did not explain other than to say it was not a good picture. He told me they would have the results the next day because it was so late in the day when it was done. So we left and came home. Only to find out two days later that I now have a blocked artery in my brain but they are not sure how bad it is. I go back May 5th for an arterial angiogram to find out how bad it is and determine what needs to happen next. So then I get bronchitis and it hangs on for 3 weeks. It finally got better and I thought everything was good. Wrong! This weekend I started having cramps, charley horses and sharp pains all on the right side of my body from my toes to my head and every where in between that there was a muscle. I saw my regular doctor today and he believes it may be a precursor to a stroke. He wanted to confer with the neurosurgeon in Little Rock to see what he had to say. I am now playing the waiting game again that is my life. He is supposed to call me as soon as they discuss with him.I am not supposed to drive anymore than I just have too. I am not allowed to go walking by myself anymore until we find out what is going on and nothing to strenuous.
You know what though? I am not giving up. I am going to fight this new development with every ounce of my being. I am going to beat this too. I can still do my chair exercises but have to be careful about the strength training for now. So that is what I am going to do. I am going to stick to my diet and keep eating healthy because I will get back on track again. I have my faith that will see me through. I also have family and my friends, most especially my Spark friends that I talk to every day. You guys are like the light in the lighthouses that I love so much. Some of you have stories that are just as bad as mine and even worse. If you can still do this then I know I can too! 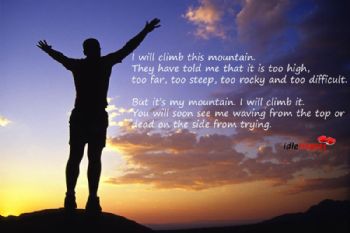 My message to all of you is Never Give Up! I know life gets hard but there is a reason you are here and reading this blog! I have been there many times and I am there right now. But as long as we keep fighting good things will happen! They cannot happen if you do not try! We are all in this together! We need each other to lean on, to share with and to support when we need it. Together we can do anything! 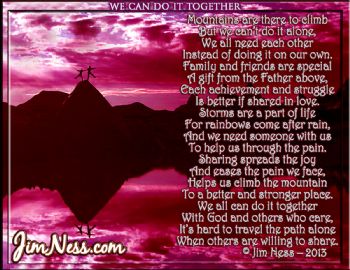 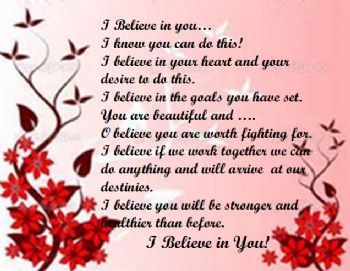 God bless you and keep you on your journey! Have a fabulous day!
Share This Post With Others
Report Inappropriate Blog
Member Comments About This Blog Post