I travelled up to Sheffield Sunday and got back home late last night. My brother has donated a fridge freezer to youngest son, Will who is still in psychiatric hospital and likely, it seems now, to remain so over Christmas. We were hoping he would be discharged before then, but unfortunately his behaviour is still very erratic and chaotic. I picked him up yesterday morning to take him back to his flat where he was pleased with the fridge freezer but quite difficult. There was a child protection meeting to attend for his daughter, Harmony, but because of his erratic behaviour he is still not allowed to see her and I had to attend myself and he got himself in a taxi back to the hospital.
The meeting was quite productive and I was able to put Will's perspective but the social workers are adement that they will only allow him supervised contact at a designated centre and Will is equally determined that he won't do that. He doesn't see that he is a danger to her and has been angry with the social worker for insisting that he needs parental assessments before he can see her. It's at a bit of an impass at the moment, so it was not stress free seeing him this time. I can understand his anger and frustration, but he has to learn to contain it if he wants more freedom, and he has to learn to obey the rules too. He has been stopped from unescorted home leave for the moment because he stopped out for 4 hours last week, phoned for an ambulance because he said an overdose while back at his flat- which he hadn't and had to be brought back by the police. I do not envy them one little bit, but at least they get to go home at the end of a shift unlike me!!!
However, I did get to stay with my daughter Mina and family and have a good catch up and I did get to see Laura and Harmony after the meeting in the cafe across the way before heading for home which was delightful. 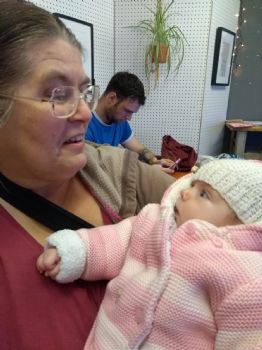 Harmony is now 10 weeks old and beautiful. She does have some problems and will require surgery, but is still beautiful and beginning to smile and make responsive noises.
Share This Post With Others
Report Inappropriate Blog
Member Comments About This Blog Post