And suddenly, it's March

Hard to believe another month has gone by, AND almost a year since California's first shut-down.

I completed radiation treatment last week and am really glad it's over. Unfortunately, I have been in some pain this week and really tired. Normal for this type of treatment, but it seemed to really catch up to me. It's been a good lesson in paying attention to my body, despite wanting to push for one more errand and despairing a bit at how messy the house is. I am feeling slightly better today, except that last night, my skin started to blister. Ugh. At my final appointment with my doctor, he said I could swim one week after my final treatment IF I didn't blister. Sigh. I'm also not exactly sure what to do for it. I had one full appointment with a nurse who went over skin care, but blistering wasn't discussed. I have messaged my doctor.

Radiation was difficult for me. The first week, the appointments were at all different times, mostly early evening. It was hard to have to get downtown at that time when we are used to eating on the early side and going to bed early. I couldn't eat much, as I lay on my stomach during treatment and it's a bit uncomfortable. Also, 2 of the 3 techs were MEN which made me really uncomfortable. I felt a bit of body shame and vulnerability and came out crying after etch session that first week. I swear, if I still drank alcohol, that would have been it. Instead, my husband asked if he could take me to BAskin Robbins! LOL. Very sweet, but too late for that as well!

I had a bit of a breakdown on Friday of that first week. I was supposed to have an appointment with my radiation oncologist, and out of the blue I got a message that I'd be having a video appointment. I kind of lost it. He called me right away and I give him a lot of credit for just listening. And, working with me to make some changes to treatment. After that, I only had women techs and no music playing. Oh I didn't mention - there was loud music playing, kind of hard rock. It was very disorienting for me and made me feel like I was just kind of on an assembly line. Very dehumanizing. Again, that changed Friday evening and I felt like I was heard. It's hard as a woman and a people pleaser to speak up. But I did. I have nothing to compare it too, but apparently in "normal" times they try to keep you with the same techs so you know them. Wasn't happening with fewer machines and longer days to accommodate those who needed treatment.

Doing art during this time was very important to me. Luckily, the instructor has youtube videos in addition to in person instruction. I was unable to attend in person as my appointments ultimately moved to 5:15 pm and my class is 3-5. It helped to be able to sit in the living room where I set up a table and draw and paint. 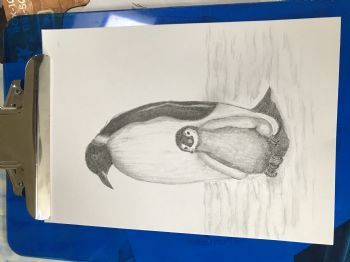 Here's the penguin that I finished. 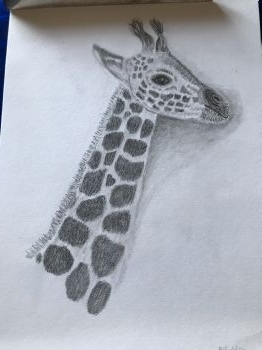 My husband got his second vaccine and had a pretty rough day after. He recovered after being in bed, tired and achy, for one day. I have tried to get on a waiting list but it has been crazy. I'm hoping that more vaccines become available and that I'm able to get one as I have a cancer diagnosis now. Otherwise, I'm too young...

It has been nice and sunny here which is fine except we need rain. I'm hoping there is some more coming soon. I still use my drought techniques like the bucket in the shower but still.

Well, better close and get some lunch. Hugs to all and stay safe. Thanks for reading.
Share This Post With Others
Report Inappropriate Blog
Member Comments About This Blog Post