Fact or fiction: Margarine is one molecule away from plastic 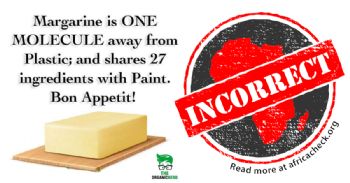 An alarmist email with the above claim that margarine is one molecule away from plastic along with other misinformation has been circulating since 2003 and unfortunately I recently saw it posted here on SP in a blog.

Through the years these false claims have developed legs and have been repeated over and over again - I've even seen it on local community websites being submitted by readers and posted. And it is disheartening that " the shoddy pseudo scientific exhortations of self-proclaimed experts" are being aired in newspapers with louder voices such as The National Post, but, repetition does not make these assertions correct and most importantly they are not based on fact nor are they verified by any 'real' scientific studies. Here are just a few of the false claims and the repudiation.

Snopes has a wonderful reputation for in-depth investigation and fact-finding. See their 'Margarine vs. Butter' article that tackles the claims made in the above mentioned infamous email which they labeled as FALSE at: www.snopes.com/f
act-check/the-butter-truth/

"The email is full of scary statements, including that if you put a tub of margarine outside, it won’t decompose because it’s ‘nearly plastic’. Dietitian Caryn Zinn explains:

“When we examine the chemical structures of both materials, it is easy to see why someone would suggest this; margarine has a similar chemical backbone structure to plastic. However, the same could be said about butter, or any fatty acid present in the human body. Many varied substances share similar chemical properties, but even the slightest variation in molecular structure can make a world of difference.”

The bottom line: Myth
Human beings are only a couple of DNA links away from chimpanzees, but it doesn’t make us the same!"

"Margarine was originally manufactured to fatten turkeys
- "When it killed the turkeys, the people who had put all the money into the research wanted a payback so they put their heads together to figure out what to do with this product to get their money back. It was a white substance with no food appeal so they added the yellow coloring and sold it to people to use in place of butter."

Nonsense! It absolutely was not manufactured to fatten turkeys. It was invented in France in 1869 in response to Napoleon III’s offer of a prize to anyone who could produce a viable, low cost substitute for butter, intended for use by the army and the lower classes. Hippolyte Mège Mouriès concocted a mixture of beef fat, salt water, milk, and margaric acid. He called it oleomargarine. The beef fat was eventually replaced by vegetable oils. Butter is made from the butterfat in milk; modern margarine is made from refined vegetable oil and water, and may contain milk.

It was originally marketed without yellow coloring, and people readily bought the white version...At one point, they sold the white version along with a package of food coloring that could be mixed with it to make it look more like butter. Eventually they began doing the mixing themselves prior to marketing."..

"Margarine is but ONE MOLECULE away from being PLASTIC and shares 27 ingredients with PAINT
- This is absurd and was obviously made up by someone with no understanding of chemistry. It doesn’t even make sense. Margarine contains several different molecules. Plastics are polymers and completely unrelated to anything in margarine. Paint doesn’t contain any of the ingredients in margarine. I can’t even imagine where this claim came from unless perhaps some ignoramus confused the quality of plasticity with the molecular composition of plastics.

If they were thinking of atoms rather than molecules, that’s even worse. Water (H2O) and hydrogen peroxide (H2O2) only differ by one atom, but drinking water is necessary for life while drinking hydrogen peroxide is a very bad idea. The properties of molecules have little to do with their chemical composition."

www.huffpost.com
/entry/margarine-vs-butter
_b_3617455 also looked at some of the false allegations,

"“When a square of butter and a square of margarine were put into a baking pan, then insects (ants/flies) were added, they went to/landed on the butter. This tells you that nature chooses real food!”

I’m not sure how bugs have the ability to detect between real food or not. I’ve seen them land on just about anything — they don’t seem to discriminate. But I could be wrong, so I did some digging. It turns out there’s no scientific evidence to back this myth up. The basic method of making margarine consists of emulsifying a blend of vegetable oils, water and sometimes milk, which are real foods. Choose the margarines that are free of trans fats."

And as the Huffington Post article mentioned above said, "To maintain a healthy lifestyle, choose unsaturated fats more often, like soft margarines that are non-hydrogenated and trans fat free. Simply put, consider what you are consuming. Both butter and margarine have the same amount of fat, but different types. Fat is essential in our diets. It is important to know which types of fat we want to make sure we include in our diet (unsaturated) and which types of fat we want to limit (saturated).

I know this is a lot of information to read and I could have added so much more, but the bottom line is that each of us should check out the accuracy of info before we pass it on to others. We should look at the objectivity, the expertise, the credentials, and what scientific proof exists to substantiate the claims made. If we don't have the time to check the veracity of the claims than we shouldn't share it. In this age of 'alternative facts' we need to be more vigilant, responsible and more careful than ever. 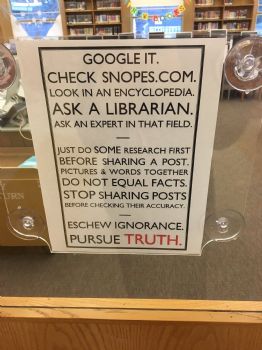